Over the weekend I got the opportunity to go down to London for the day to eat Afternoon Tea in the Berkeley thanks to my wonderful Godmother who treated me for my 18th birthday. I had such an amazing time there after getting a manicure in the spa upstairs and then getting to eat my favourite runway looks from London Fashion Week.  But now I’m back and I’m ready to tell you guys all about it… 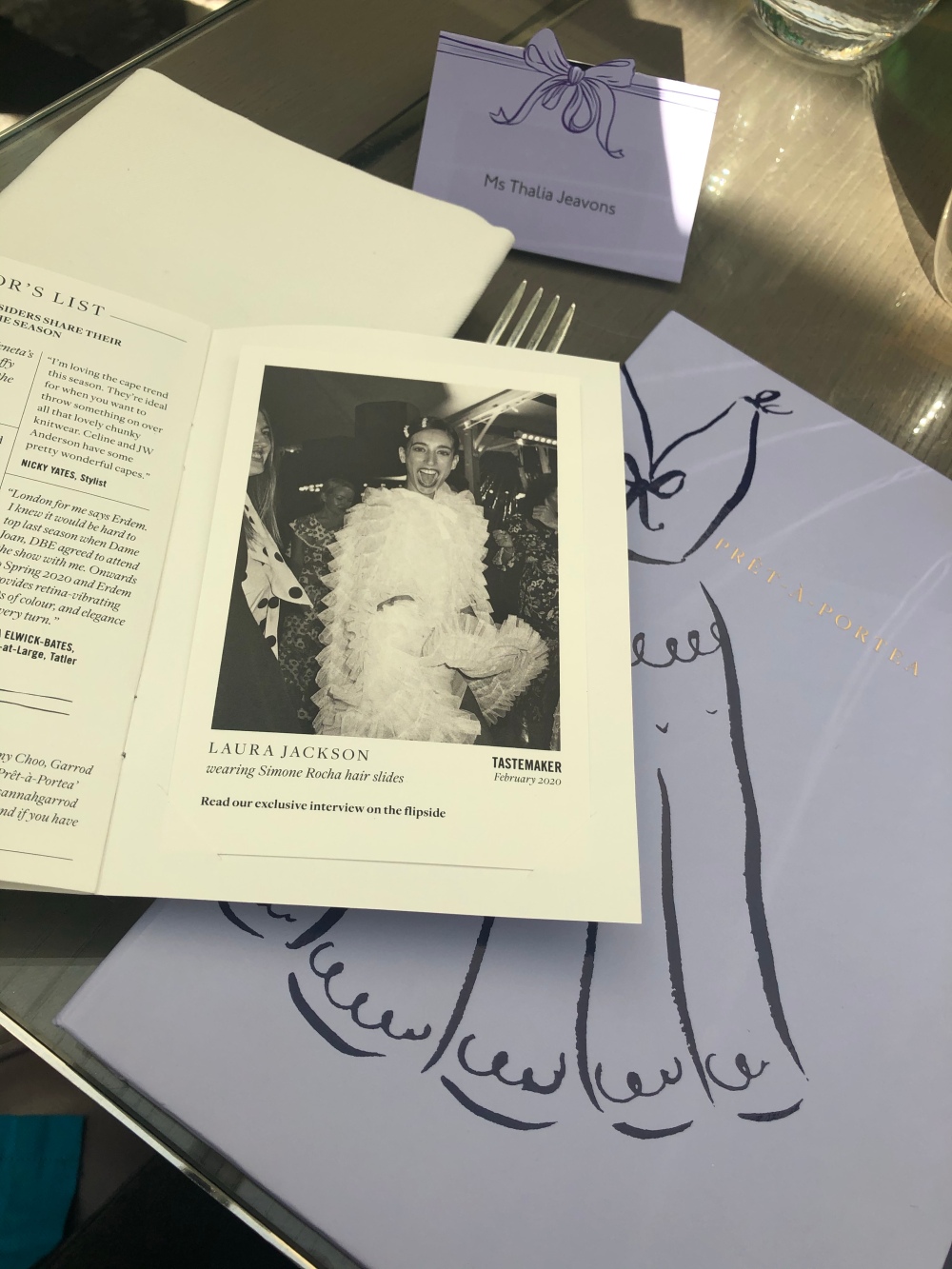 Since it was a surprise, I had absolutely no expectations whatsoever. Once we were seated, on the table was a little booklet full of runway looks from this years London Fashion Week that has only recently passed and I immediately flicked through it to see what it involved which is when my Godmother told me and I suddenly guessed – this isn’t just a normal Afternoon tea this is a Fashion Afternoon tea. 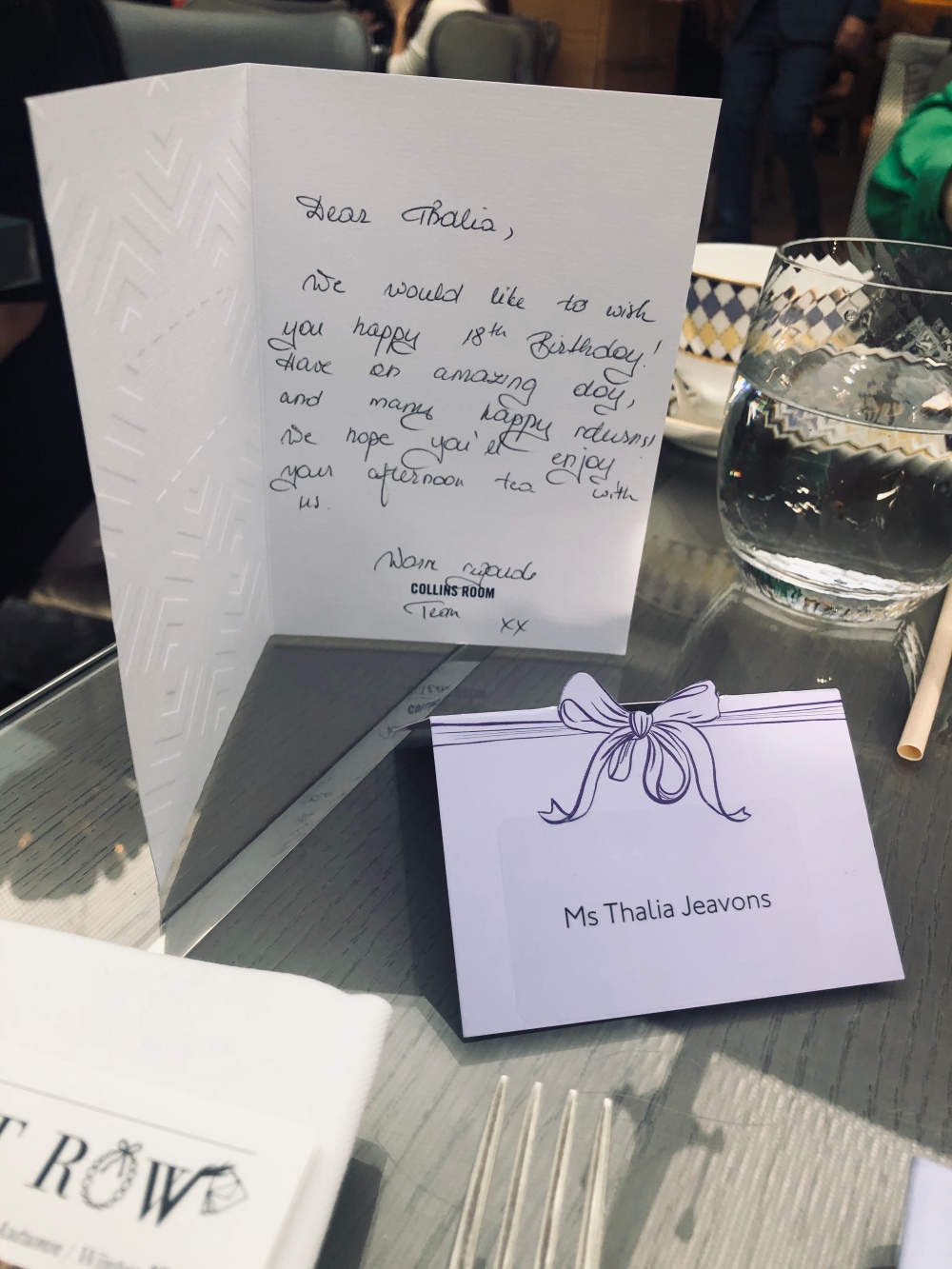 Beforehand, my Godmother must have informed the Restaurant about my birthday because they left me a lovely little handwritten card on the table. She also booked the table under my name for me to get the cute little reservation card with my name on it which overall just added to the boujee-ness of the whole experience haha.

After finally settling in, we chose what flavour of tea we wanted and I chose the recommendation from the (really nice) waitress which was called ‘Red Dragon’. Whilst I was looking at the menu I noticed the treat options and automatically thought we chose one from the list, but to my surprise I was very, very wrong.

Since I’m a Vegetarian (also good to let the restaurant know beforehand), none of my food contained any sort of meats or fish. We got 5 sandwiches each, my favourite had to be the one with brown bread that included Butternut squash, yup butternut squash in a sandwich – and it was delicious.

The little savoury treats on the side were again suited to my preference and didn’t include meat. Mine was the one on the left and included truffle baked new potatoes, wild mushrooms (which I couldn’t taste at all (which is a good thing)), blackberries, soubise veloute & watercress. And I ate the whole thing – it was lush. 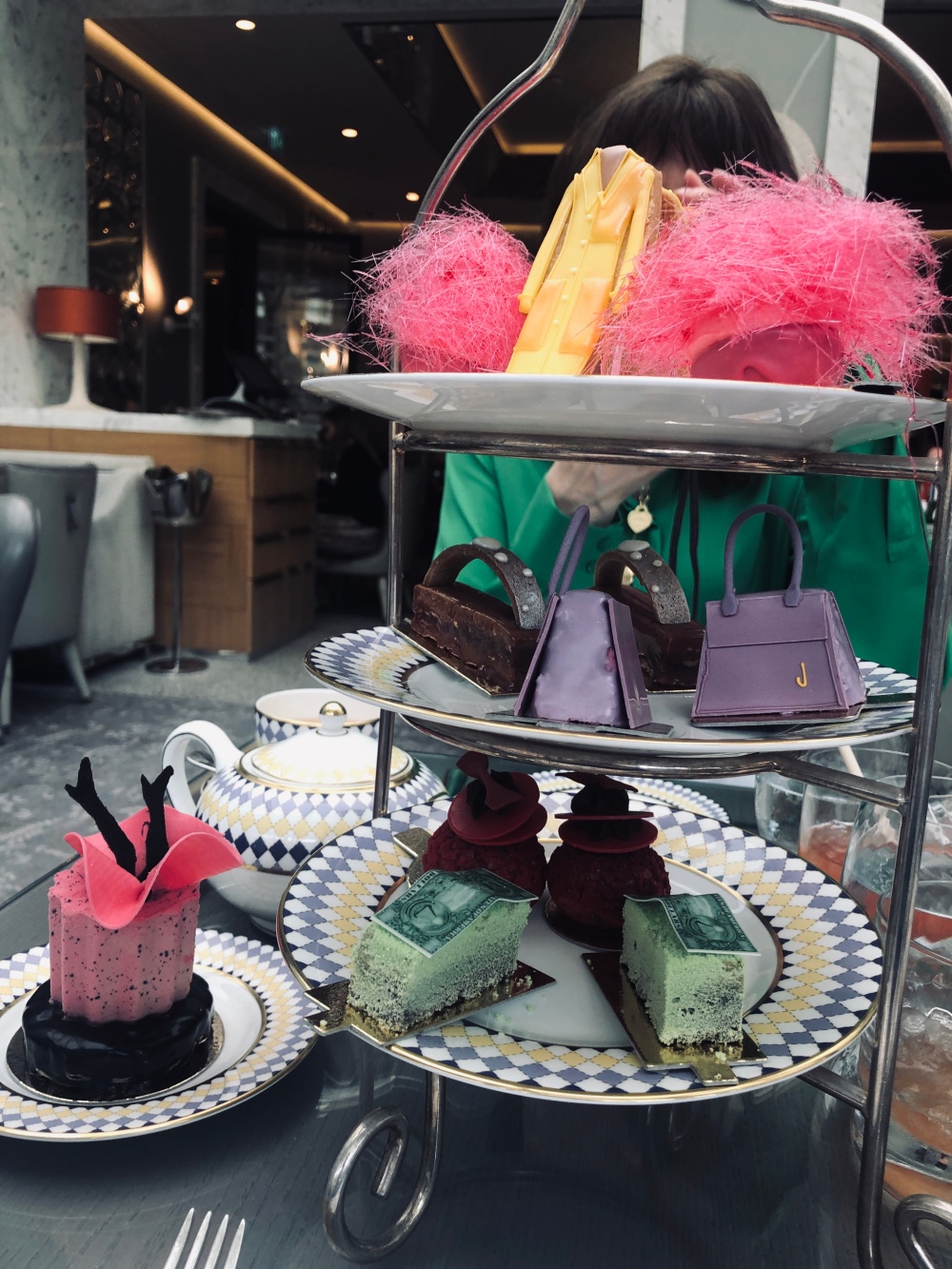 Then once we were finished, this bad boy arrived! If you think it looks amazing in the pictures, you should have seen it in real life! I was in Fashion cake heaven.

So, the little booklet that I mentioned at the beginning which included all the runway looks, each piece of food was inspired by one of those looks – brilliant right?! Going through them fairly quickly (more detailed version at the end) the money cake was inspired by Moschino, the red velvet cake by Emilia Wickstead, the purple handbags – well I think those ones pretty much speak for themselves – Jacquemus, the brown hair slides inspired by Simone Rocha (also one of the biggest trends in Fashion right now), the pink sugary cake by Molly Goddard, the yellow coat by Fendi, then lastly the one to share (on the side) was inspired by Richard Quinn.

They also brought this happy birthday plate with a candle on which was such a cute and thoughtful touch. Although we had absolutely no room left at the end to eat the chocolate from it we still devoured the berries. 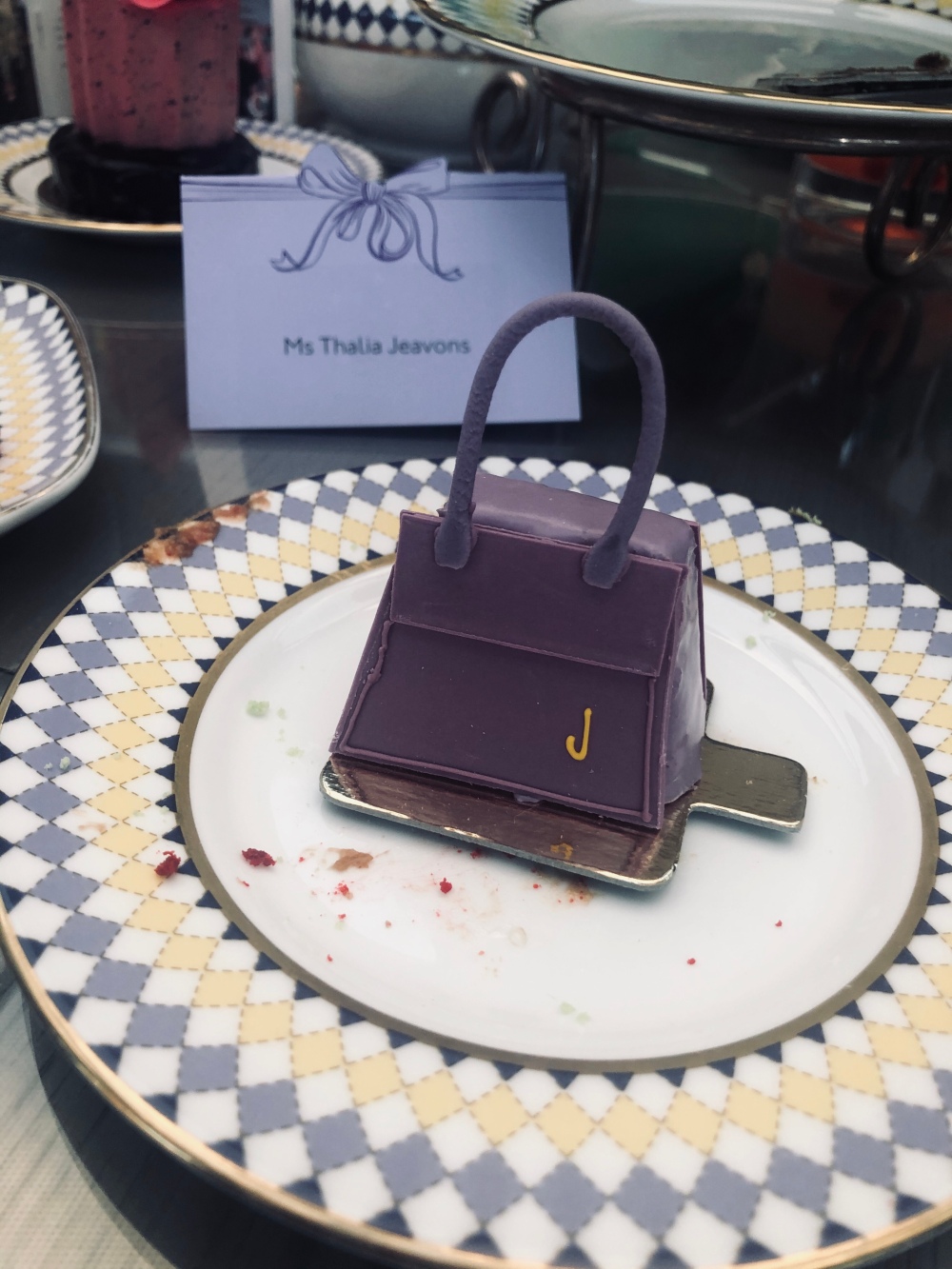 Here’s a few close ups of the treats and how they look compared to the runway look they were inspired by. I’m happy to say that each one was also amazing and we ended up eating the whole thing even if we did think we were going to do an Elvis by the end of it, they all tasted amazing. Personally my favourite was the first one I ate which was inspired by Moschino, I also really loved the purple Jacquemus bag and the hair slide, but as I said each were amazing and I could definitely eat them all again – just give it a few more days hahaha.

After about 2 of the cakes and due to the unlimited amount of tea, I had to go to the ladies room. It was really nice in there too btw but when I got back, as if this whole day wasn’t enough already there was another surprise waiting for me in a gift bag on the chair.

When I first saw it I assumed it was another gift from the restaurant, wondering what else they could possibly have given me for my birthday, but to my surprise it was another treat from my Godmother. Although I’m not actually 18 until Friday, she let me open it while I was with her, and wow was it a surprise..

I first opened a Gisou box, which if anybody knows me you will know how much I love Negin Mirsalehi and I’ve always wanted to buy her products but because of shipping costs from the Netherlands I never have. I got the Hair perfume which smells heavenly! I also got *drum role please* a silk Dior headscarf, which wow I am so grateful for and you guys will for sure be seeing me style it in the near future, but for now I wrapped it up again to surprise myself all over again on Friday haha.

The Flavours of the Treats, Information from booklet (not in order)

The inspiration behind her collection was The Godfather. This red velvet gown is depicted as a red croustillon – covered choux bun, filled with Gianduja crémeux and roasted macadamia nuts. It is topped with chocolate disks, whipped ganache and a red sugar bow.

(Pronounced ‘jack-a-moose’) The miniscule ‘Le Micro Chiquito’ bag is so small it only holds a pound coin and has been a global Instagram sensation. It has been created as an almond and blackcurrant cake with chocolate garnish and finished with a cassis mirror glaze.

It was Quinn’s AW18 show that caused a frenzy as Her Majesty The Queen appeared on the ‘frow’. This season, the designer juxtaposed a riot of florals with atex bodysuits, boots and opera gloves. This cake is designed to share and is a pecan chocolate sponge topped with white chocolate and framboise mousse with a rasberry and ginger confit centre. The final flourishes are a blue sugar bow and wafer legs.

This piece featured in Karl Lagerfeld’s posthumous collection for Fendi, where he served as designer from 1965 until 2019. This lemon sablé biscuit is piped with glossy yellow royal icing.

(Pronounced ‘mos-key-no’) Designer Jeremy Scott was inspired by American game shows such as The Price Is Right and sent dollar bill print ensembles down the catwalk. A velvet pistachio and mascarpone cream delice with a salted crumble base and – of course – topped with a sugar one-million dollar bill.

This epic gown was the finale piece of Goddard’s collection and is made from 100 metres of neon netting. The dress appeared in cult TV series Killing Eve  making this dress a cultural phenomenon and is now housed in The Met in New York. This cinnamon financier is filled with Pink Lady apple mousse and apple compote. The cake is wrapped in pink spun sugar and sprayed with glitter tableside.

The Simone Rocha hair slide is a speculoos biscuit with clusters of shimmering sugar pearls, on top of a Caramelia mousse coated with Gianduja gaze.

Thank you for reading, I hope you all enjoyed. If any of you guys are ever in London I would 100% recommend this restaurant for special occasions, it really was a brilliant experience. If you have any further questions be sure to let me know in the comments, otherwise I hope you all have an amazing week!!