Hey guys, welcome back to another blog. Last Weekend I was lucky enough to visit the John & Yoko ‘Double Fantasy’ Exhibition in the Museum of Liverpool. After being told it was pirate day we headed for the Albert Dock and then got told it was the week before, so we headed to the museum wondering what else there is for us to do. Then of course, we came across this exhibition.

My mum saw it first and had heard of it online so we listened to her and not thinking anything at first, walked up to the top floor and had a look around.

The exhibition started off on the landing where immediately there were works of art on display before you even went into any rooms. There was a map of the world on display that went to a local school where the kids had to colour in places of the world that needed peace. The map was filled with different colours worldwide. There were art works where there’s multiple stamps of positive words frames and then before the entrance, there were trees where you could write a positive message and hang up. So already you kind of see the direction in which this exhibition is going and what John Lennon was all about. 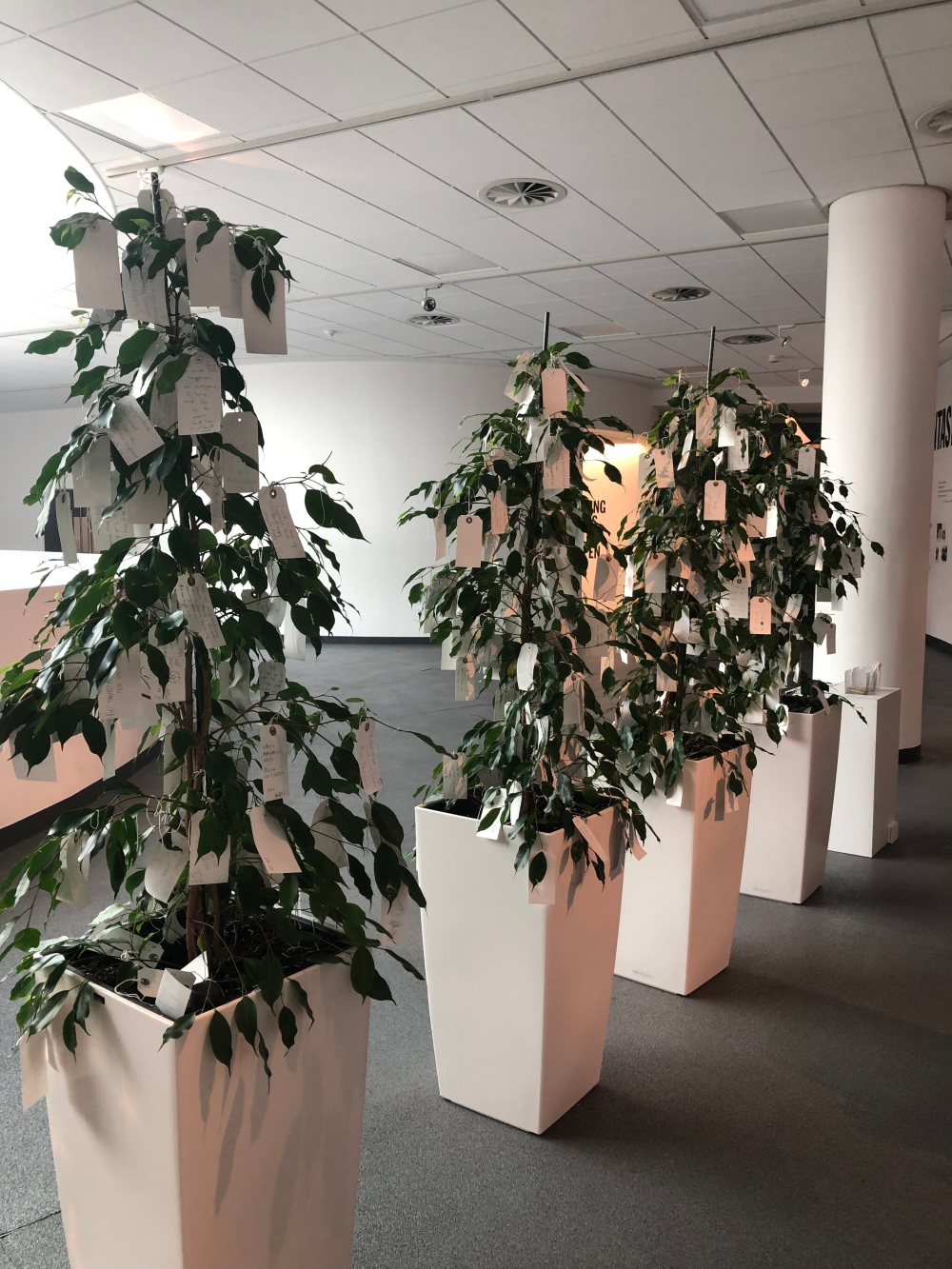 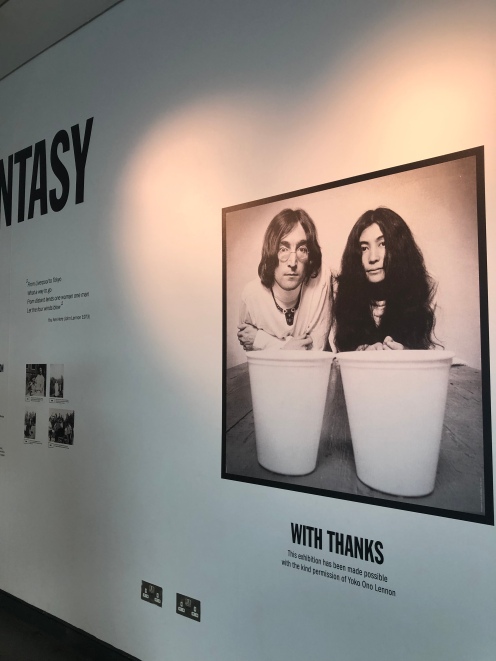 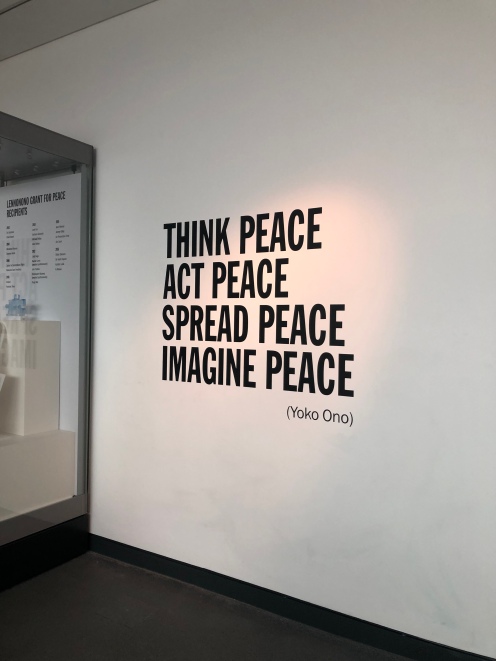 Once you walk in “imagine” is playing in the background instantly. The first room consists of  a few TV screen’s showing videos from the world war 2 in Liverpool. It was a nice way to start and really gave us an insight to what was going on in the world at the time. John Lennon was born in 1940 so was instantly born into the middle of the second world war. When creating peace within the world was always his intention it is really in contrast with how the world was when he first saw it.  It was also in mega contrast with the peace and love act that the whole exhibition portrayed.

The next room you walk into shows how John & Yoko first met. There’s informative posters next to each display which talks about the meaning of each content. In this room was a ladder and apples which is how Yoko displayed her art when John first came to one of her exhibitions. This is how they first met briefly and then started seeing each other more and more afterwards. Yoko found art in everything and had unique ideas behind each of her art works which is why her display consisted of apples and a ladder.

There were quotes around the room of their perspective on different things. A quote I loved from this room was from John saying “When you don’t conform to the image,they get upset you know. As if we belong to them in a respect that we don’t”. I think that’s a strong message that’s still relevant over 50 years on. John and Yoko being artists they always had to express their thoughts either through music, photography or items. Their message would always be for peace but they always showed this in different ways.

The room also consists of letters Yoko wrote and sentimental pieces the lovers had made for each other. 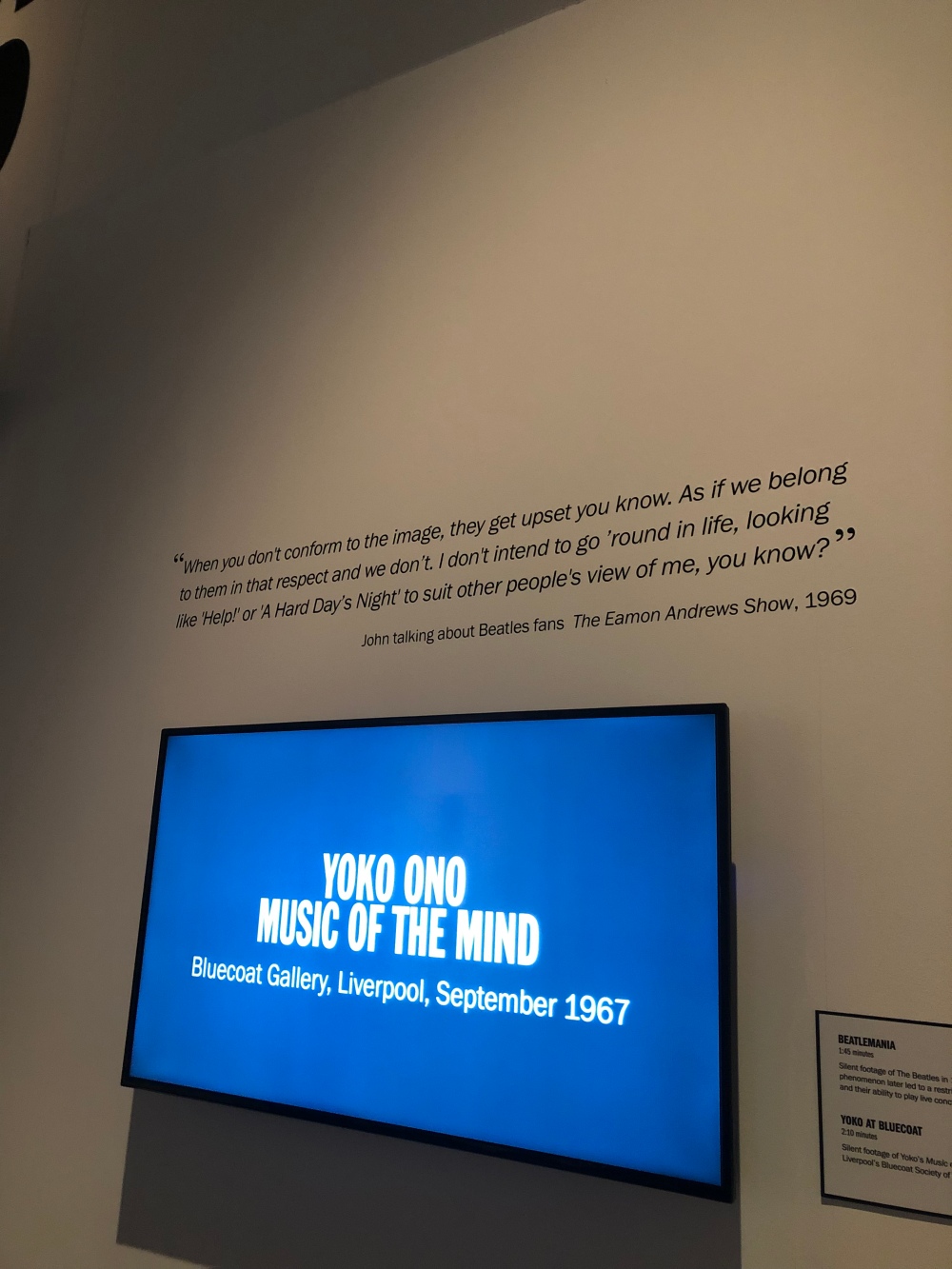 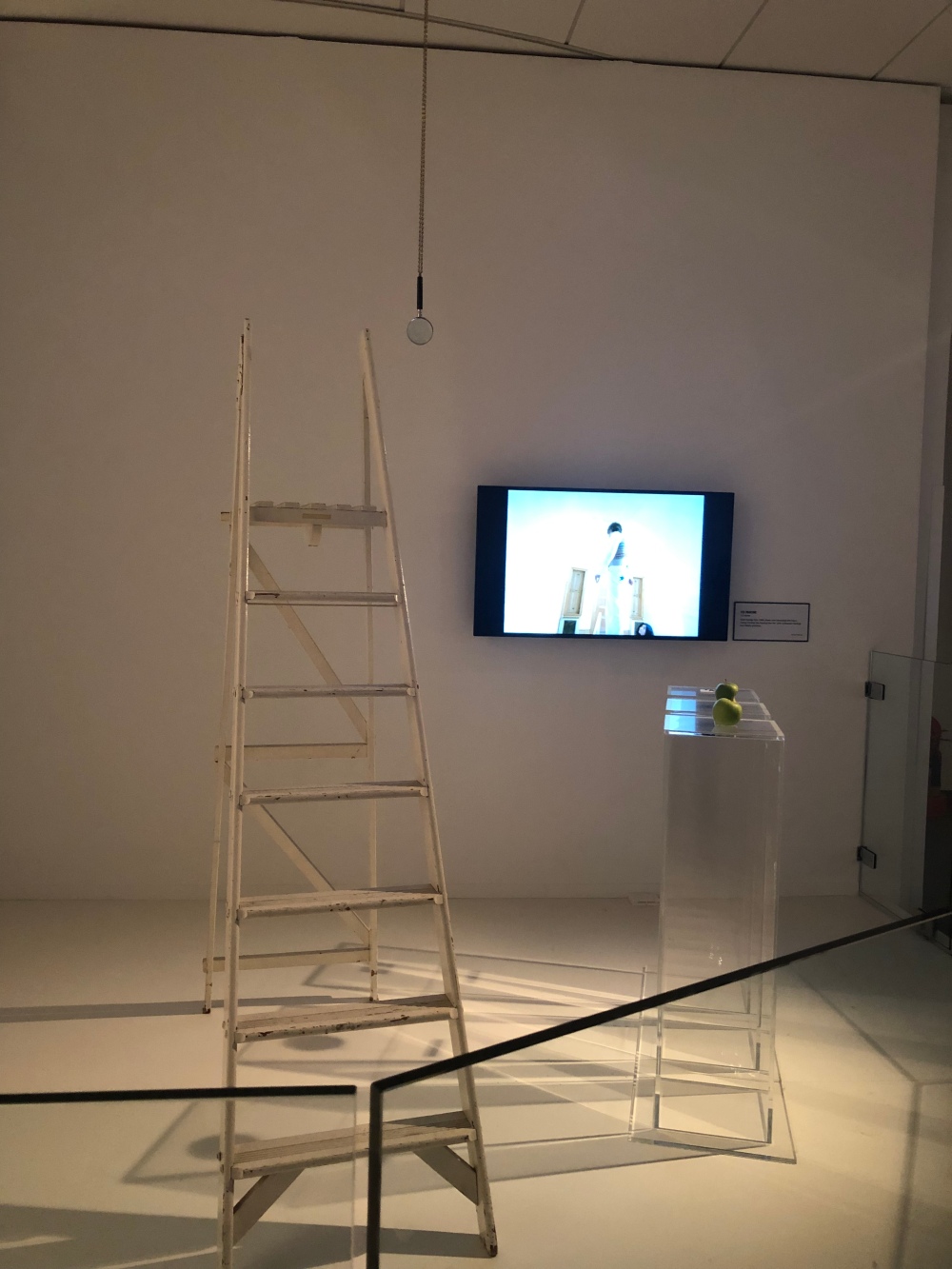 The next room was titled ‘Two Virgins’. It showed some of John’s costumes and stage accessories as well as a TV where he was interviewed to talk about his latest quote “You are here” and the reasoning behind it. At one of his concerts he gave everyone in the crowd a pin badge with the quote on and you could also pick one up for free here at the exhibition.

On one side of the wall was the image of the Two Virgins album cover of John & Yoko butt naked looking at the camera. The reasoning behind it was they chose the most unflattering picture to show that they were human. It was cool to see what everything meant and what thought went into the process. There was so much information on each display I honestly learnt so much. 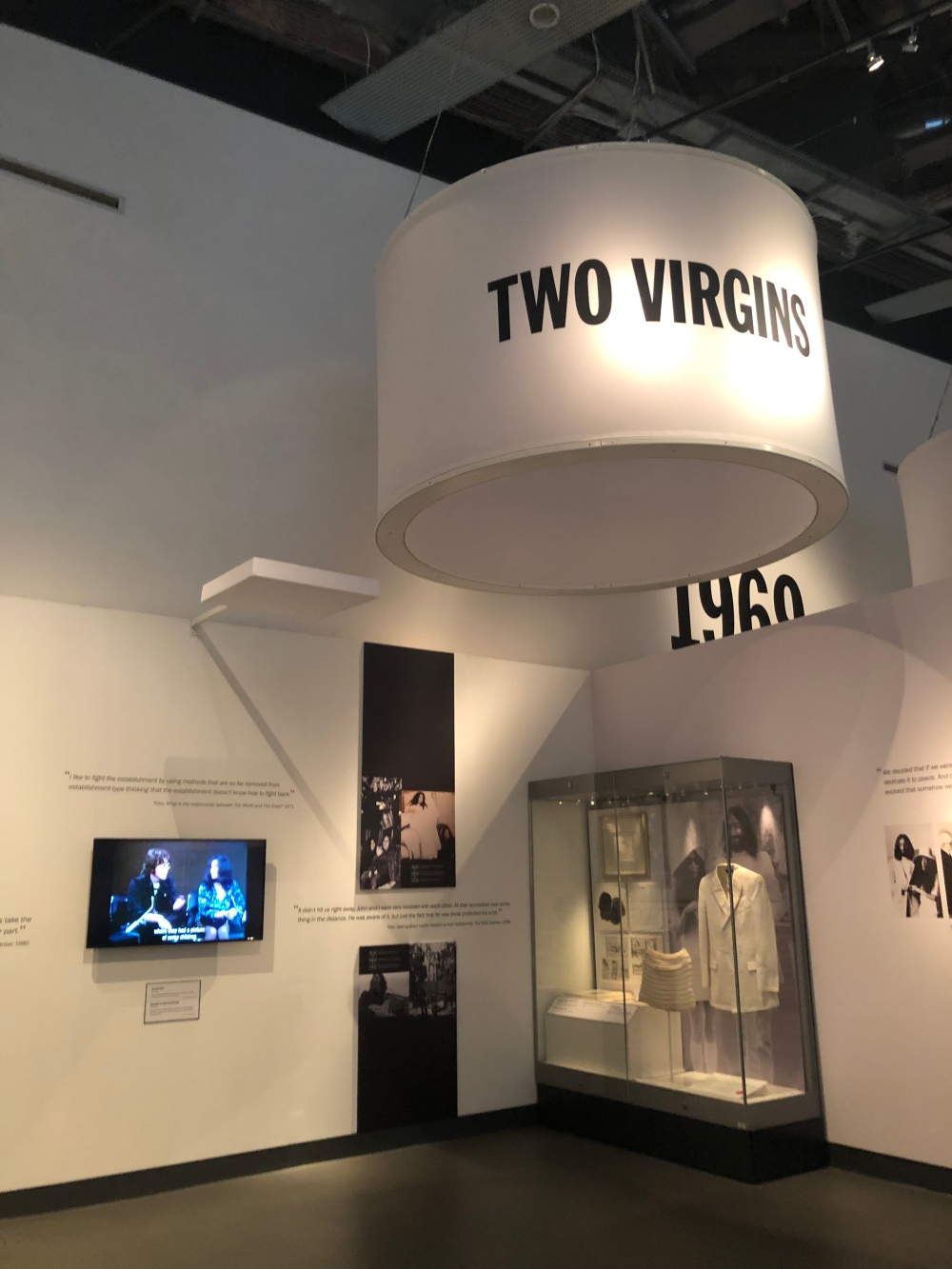 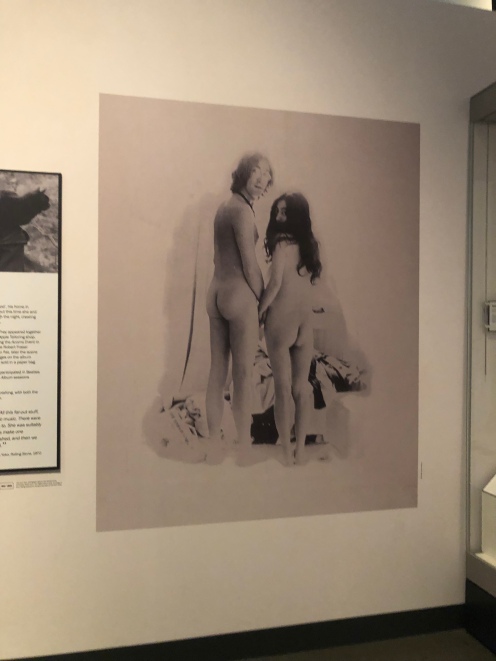 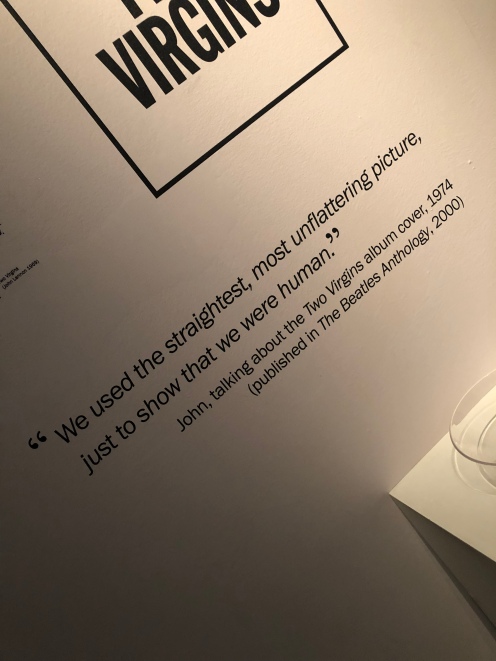 Then we walked through to the next room. This room was all about John & Yoko’s Give peace a chance protest. They posed on their bed in Amsterdam with posters above their heads saying “Hair peace” and “Bed peace”. It’s an image that instantly became iconic as well as the whole photography pieces that were made to represent peace from that bed.

In the center of the room was a bed cover inspired by John’s movement. His guitar was also on display as well as information about the images used. 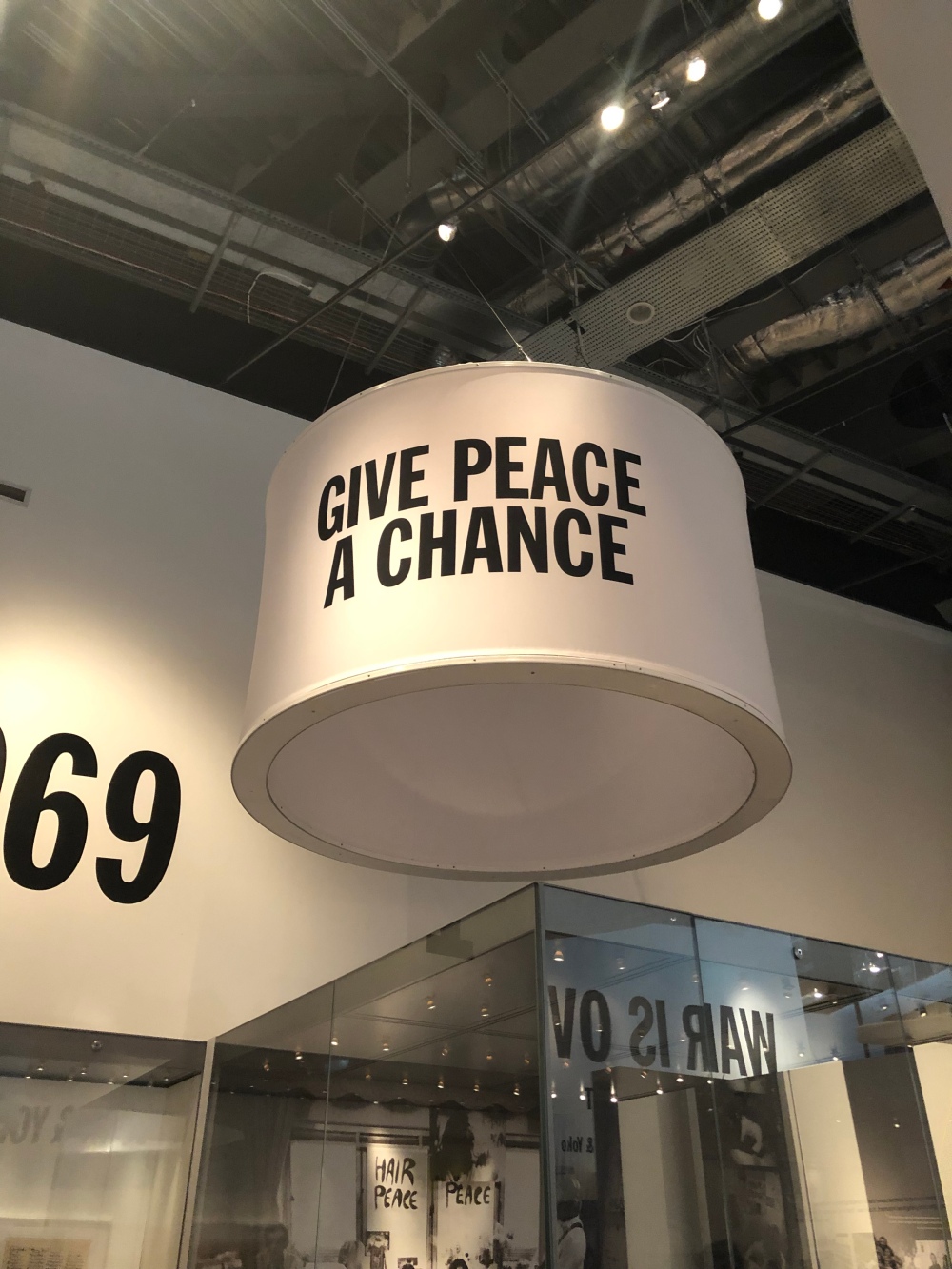 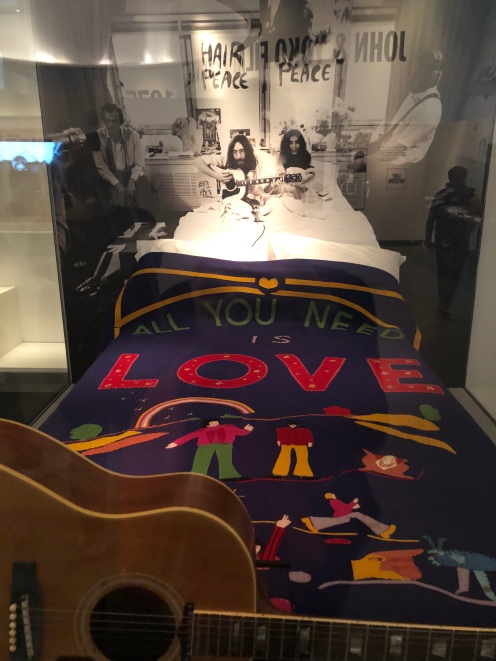 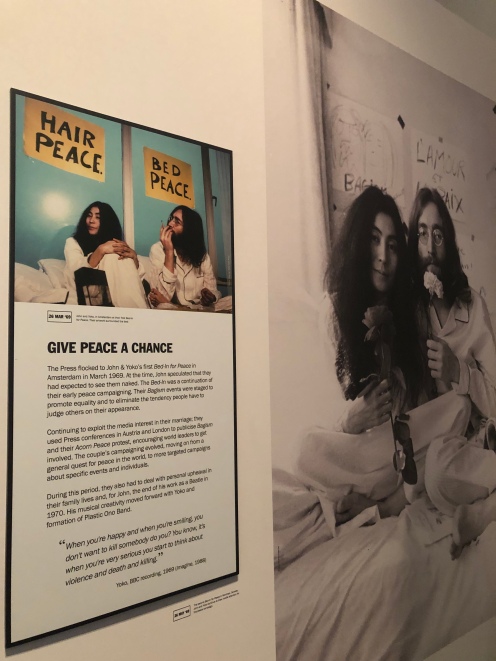 Down the middle of the exhibition were the famous John Lennon’s signature glasses. Around the glasses were 2 seating areas where you could sit and take in the whole scenery. On one side was a quote how Yoko described her love for John and on the other was John describing his love for Yoko. It was a very, very cute touch. 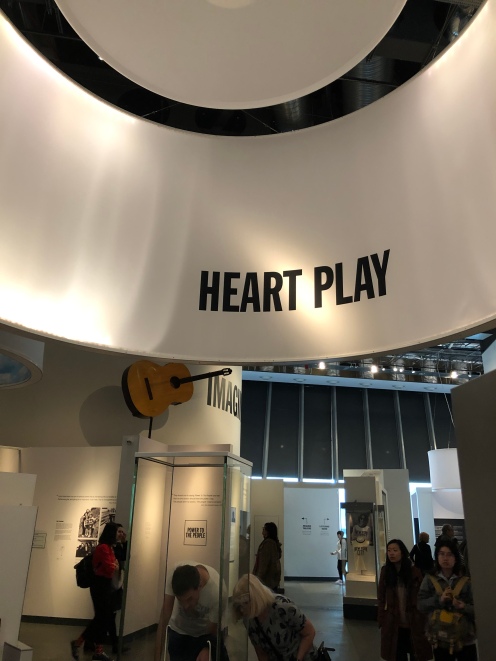 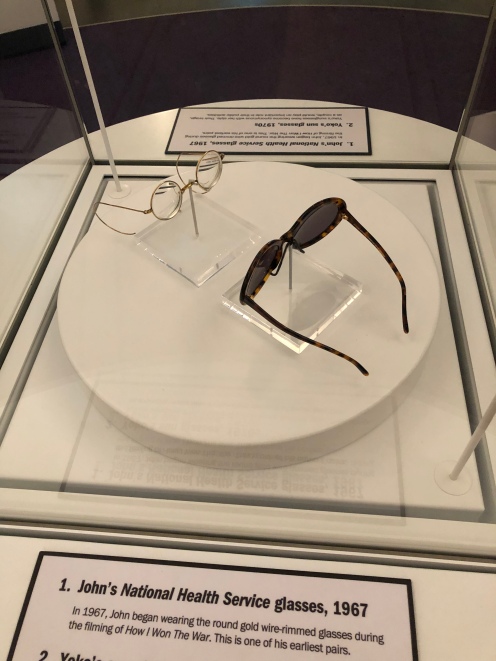 On the far wall next to the window looking out to the docs was a photo of John Lennon. There was also a post-it note station where you could write a message on a post-it to hang up around the picture. 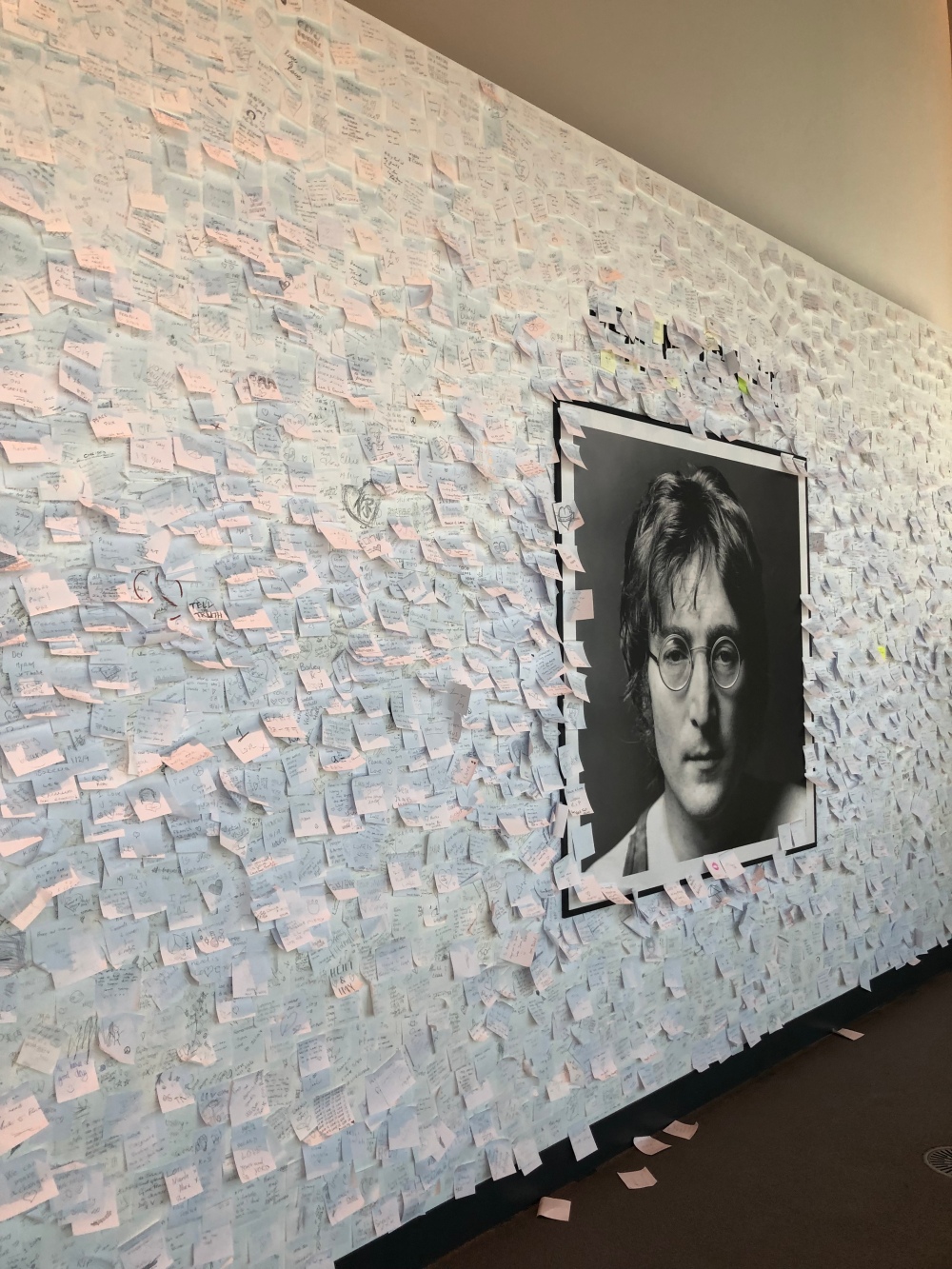 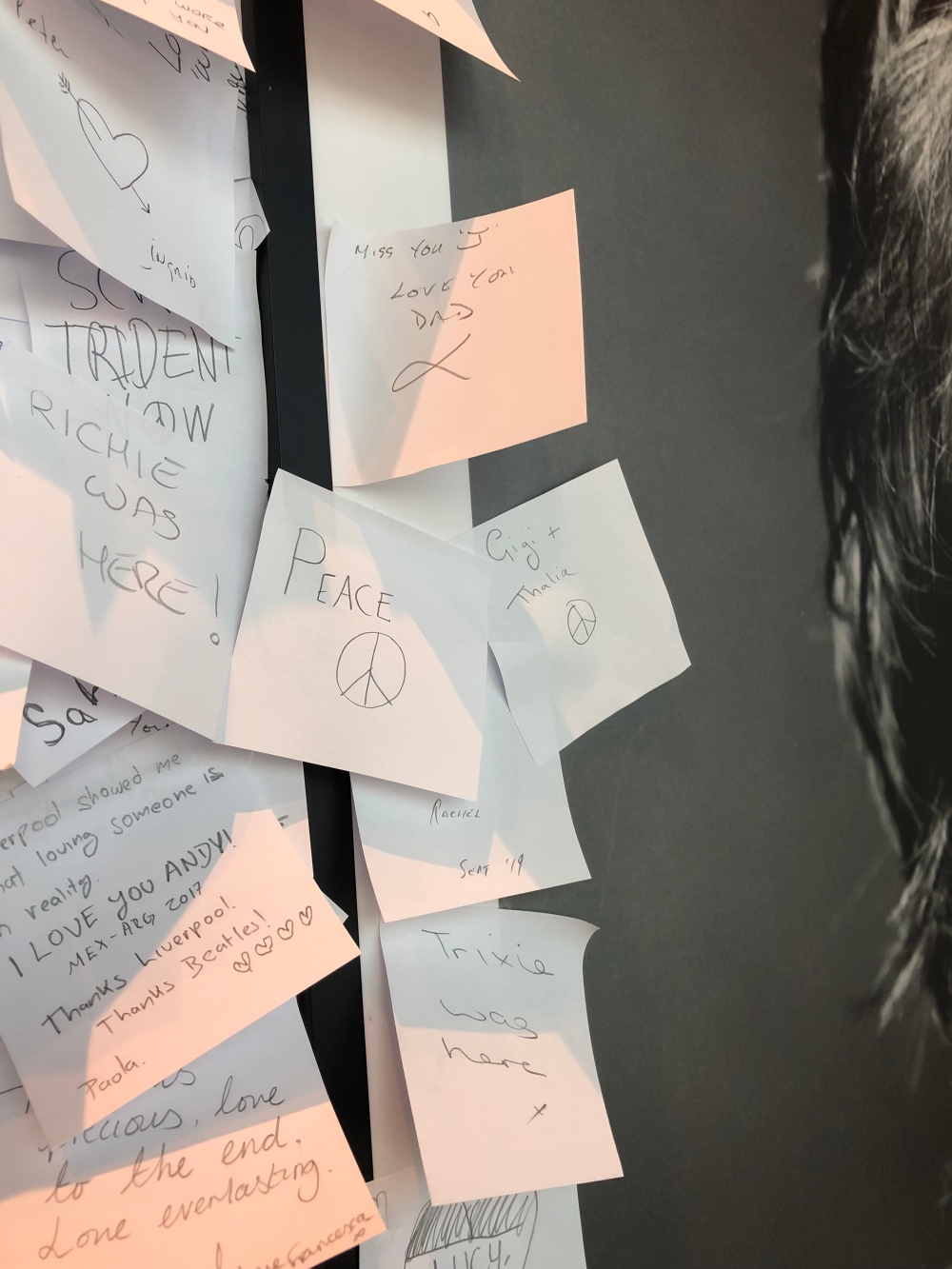 The next part was a huge area all about the song ‘Imagine’. It gives information about the meaning behind it and where John was when he wrote it. It’s a song popular worldwide and will always be one associated with John’s most inspiring. On display was also the real life pages of when John quickly scribbled the song down on paper, his famous New York T-Shirt and photographs of him performing it. Opposite Imagine was a huge sign saying one of his most famous quotes again “The War is Over if you let it”. John had always been about spreading peace and positivity and it really opens your eyes in this exhibition to what the songs really represent and the strong feelings behind them. 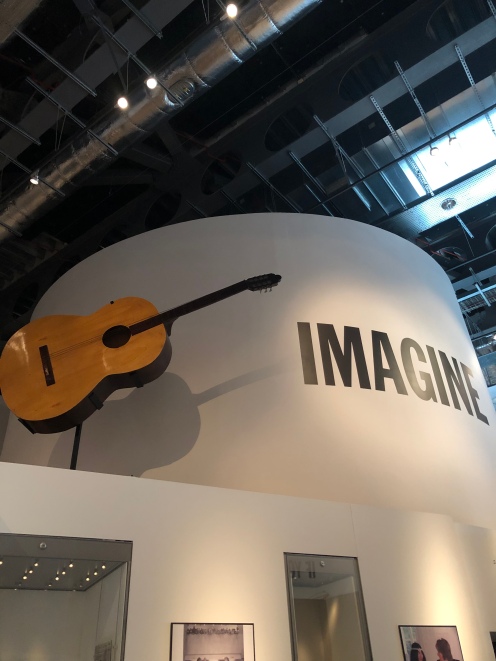 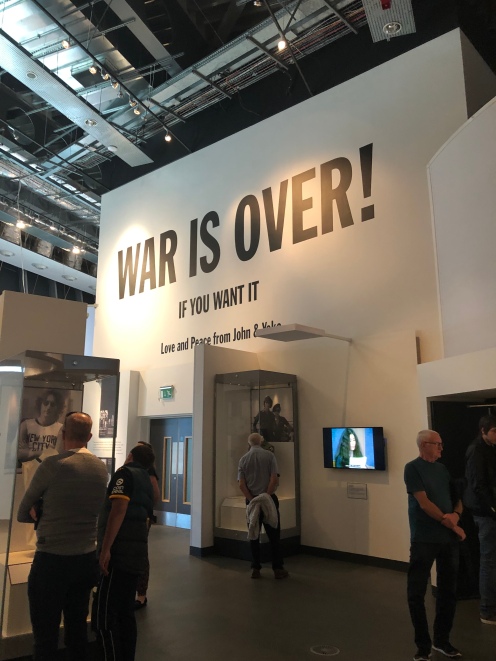 The next room was a lot more about his personal life and when he had his first kid. It highlighted how far he has come from a working class family to making it big in America. It really is inspirational and powerful especially seeing the image of him wearing a T-Shirt saying ‘Working Class hero’. 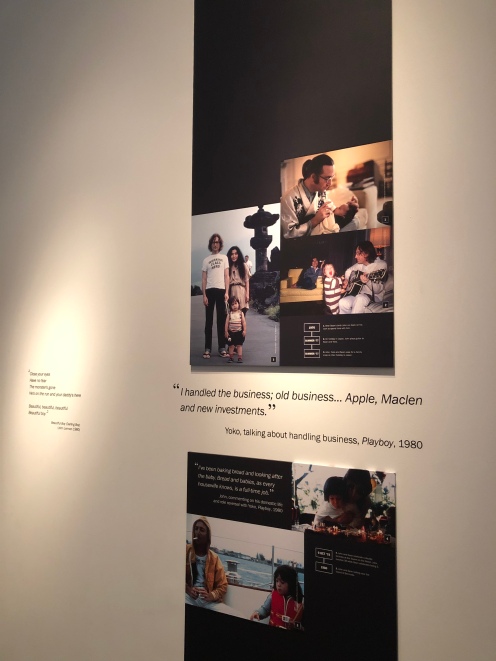 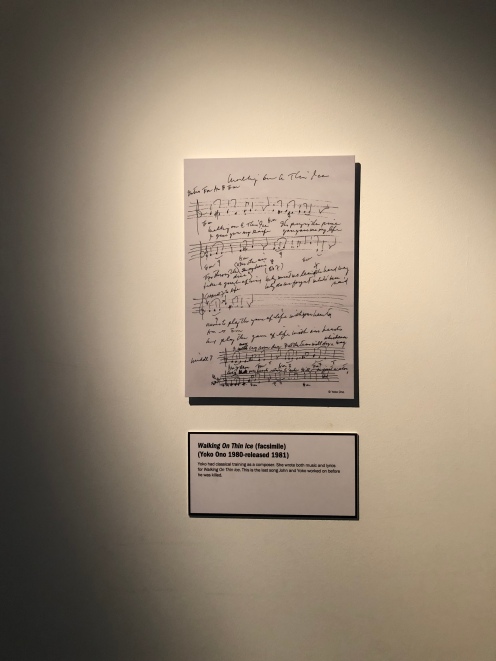 Coming to an end now, the next room was dedicated to John’s death. I think one of the most shocking, heartfelt things from this exhibition was this sign. Since John Lennon got shot in 1980, over 1.4 million people have been killed by guns in the U.S.A. Over 1.4 million!!!?? And there still hasn’t been a change in policy!! It truly is crazy to me. Also included in this room were heartfelt photographs of Yoko spending her first mothers day alone and things she has said to help her carry on with life. 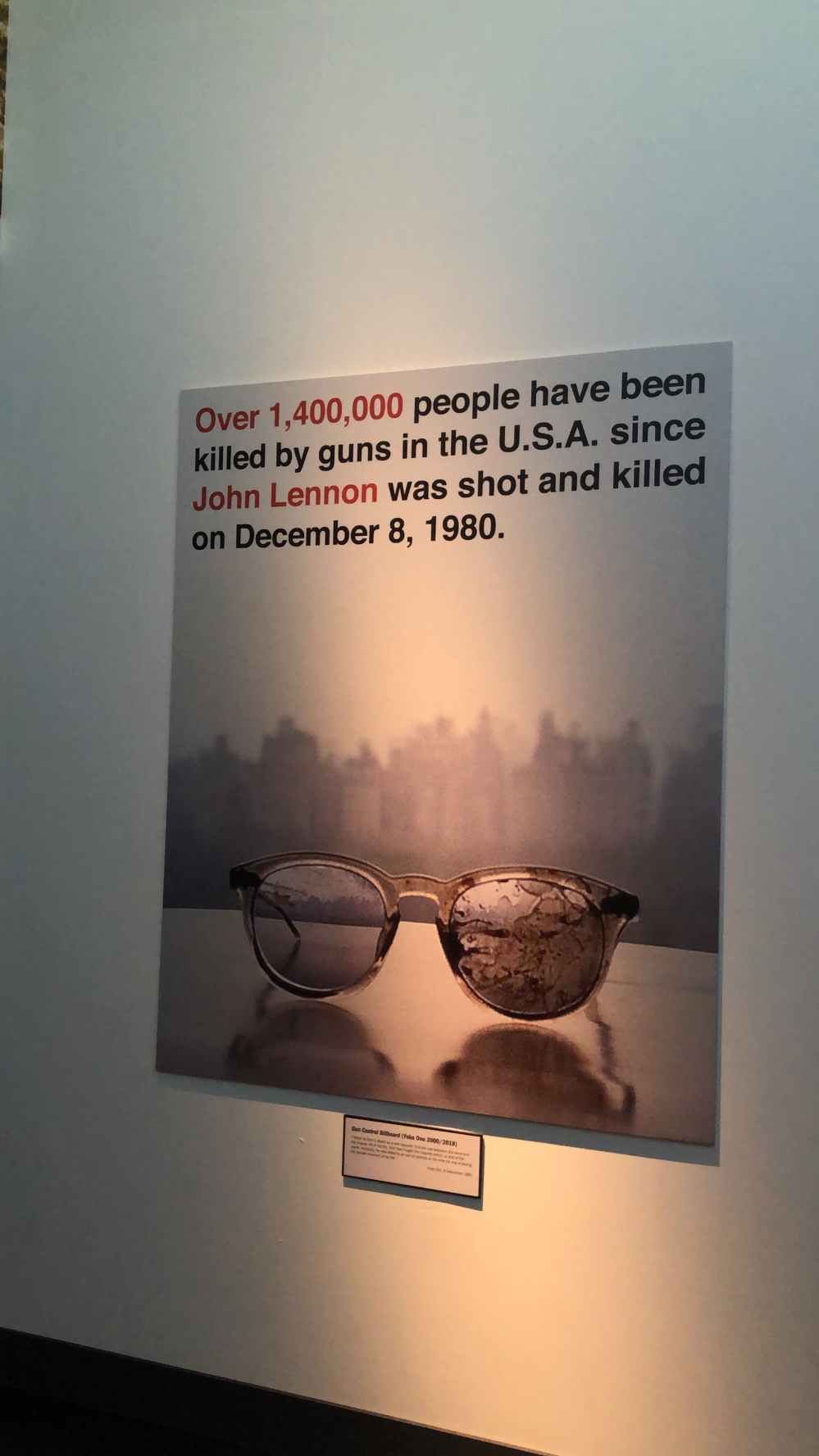 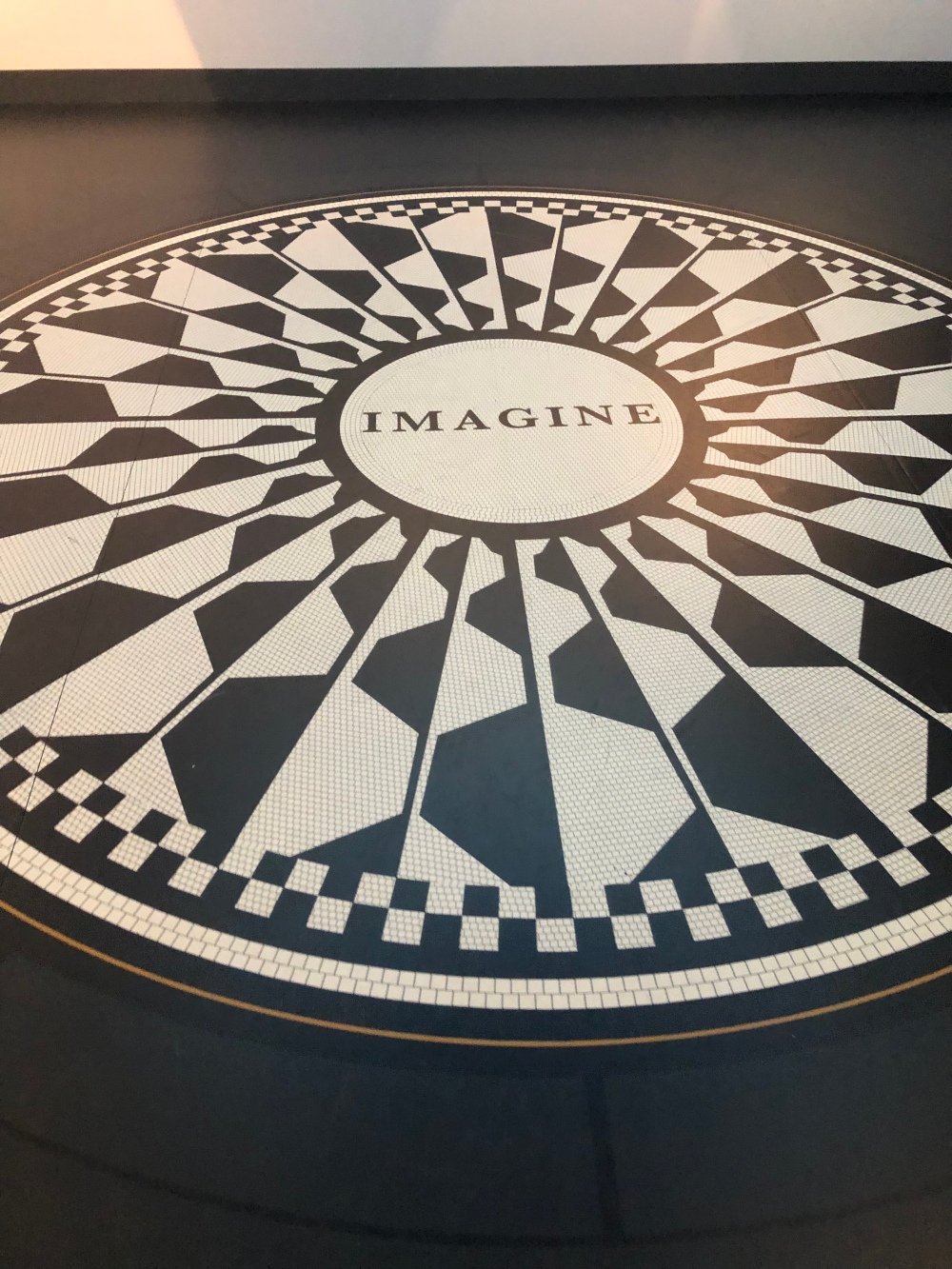 So after expecting not much from this expedition, it’s safe to say I was wrong. It really was amazing to see all of this put together and educate myself on John & Yoko’s lives. The exhibition is on in the Liverpool Museum until the 3rd of November and I cannot recommend it enough! It is educational, inspiring, powerful and I can guarantee you you’ll walk out of them doors when you’ve finished wanting to know more about his life and music. When you come out of the exhibition there is a small shop that sells merchandise for a reasonable price and you can shop clothes, accessories and books all about the exhibition. Overall it was amazing and I am so grateful that Pirate weekend wasn’t on so we were able to see this otherwise I wouldn’t have even known about it.

Thank you for reading, hope you all have an amazing week! x